The Franks Casket is an eighth century lidded rectangular box made of whale-bone, carved on the sides and top in relief with scenes from Roman, Jewish, Christian and Germanic tradition.

It is believed to be of Northumbrian origin, probably of monastic manufacture. Wilfred’s foundation at Ripon being a possible location for the workshop that produced it.

Research has shown that the casket had once belonged to the church of Saint-Julien, Brioude in Haute Loire, France. It was possibly looted during the French Revolution.

The casket was bought from a Parisian antique shop by Sir Augustus Wollaston Franks donated the casket to the British Museum in 1867. 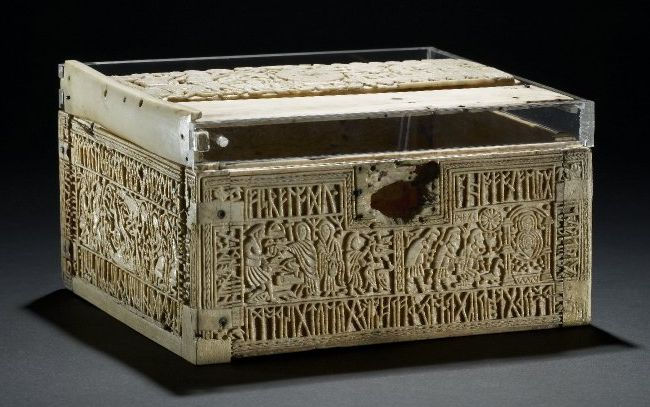 The Franks Casket showing the Front and Left Panels.
(click on the images to enlarge)

The Front Panel is divided into two scenes. The left-hand scene shows a depiction of the Wayland legend.

The scene is a composite one, showing several aspects of the myth. To the left of the scene stands Wayland at his forge, with his smith’s tools. The decapitated body of one of King Niðhad’s sons lies at his feet. He is holding one of the goblets, fashioned from the skull, which he is offering to a woman – presumably the king’s daughter, Bodvild. The second female figure in the scene is either a female attendant, or a second representation of Bodvild.

To the right of the scene a male figure, either Wayland himself, or one of his brothers, is strangling the royal geese to obtain the feathers to make the flying machine.To the right of this scene, a second scene show the three Magi visiting Mary and the Christ Child. Above the Magi is a runic inscription that reads ᛗᚫᚷᛁ (MAGI).

A runic inscription runs around the panel which is a riddle describing the material from which the casket is made:

The flood cast up the fish on the mountain-cliff The terror-king became sad where he swam on the shingle. Whale’s bone.

The Rear Panel depicts the Siege of Jerusalem in AD 70 by the Roman general, later emperor, Titus in the First Jewish-Roman War. The inscription is partly in Old English and partly in Latin with part of the Latin portion is written in Latin letters.

At the centre of the panel is a building, possibly representing the Temple of Jerusalem. In the upper left of the panel Titus leads the Romans as they attack the building.

In the upper right the Jewish population flee from the battle.

In the lower left of the panel a seated Judge delivers judgement on the defeated Jew – they were to be sold into slavery. In the lower left corner is a single word in runes: ᛞᚩᛗ – dōm – Judgement.

The Right Panel displayed in the British Museum is a copy as the original is on display in the Bargello Museum, Florence.

This panel depicts a central animal figure (a horse?) facing a figure with a stick. The short runic inscription over this central scene probably reads as ᚱᛁᛋᚳᛁ|ᛒᛁᛏᚪ|ᚹᚢᛞᚢ – Risci Bita Wudu – Rushes Biter Wood.

To the left of the panel, an animal figure sits on a small mound facing an armed and helmeted warrior. On the right of the panel are three figures.

The runic inscription running around the scenes are difficult to translate as a number of runes are illegible, and a number of different readings have been proposed. The runes are as follows:

a suggested reading by Thomas A. Bredehoft1 is:

Raymond Page has an alternative reading:2

Here Hos sits on the sorrow-mound;
She suffers distress as Ertae had imposed it upon her,
a wretched den (?wood) of sorrows and of torments of mind

The Left Panel depicts Romulus and Remus, the mythological founders of Rome. They are being suckled by a wolf lying on her back at the bottom of the panel. Above this is another wolf and two men with spears approach from each side.

The Top Panel is incomplete. There is an empty roundel in the centre which may have held the metal boss for a handle. The scene shows an archer , who is labelled ᚫᚷᛁᛚᛁ – Ægili, who is defending himself against a group of attackers whose large size may indicate that they are giants. A woman sits in a building behind the archer.

The British Museum webpage for the Franks Casket states “The lid appears to depict an episode relating to the Germanic hero Egil and has the single label ‘aegili’ = ‘Egil’.”

( N. B. The Old English texts are shown normalised to Late West Saxon) 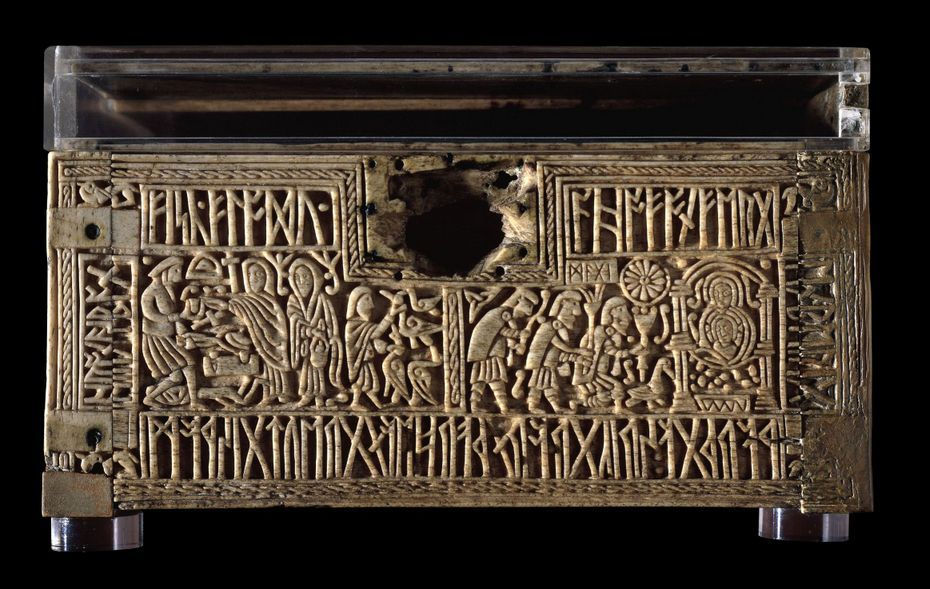 The Franks Casket – The Front Panel 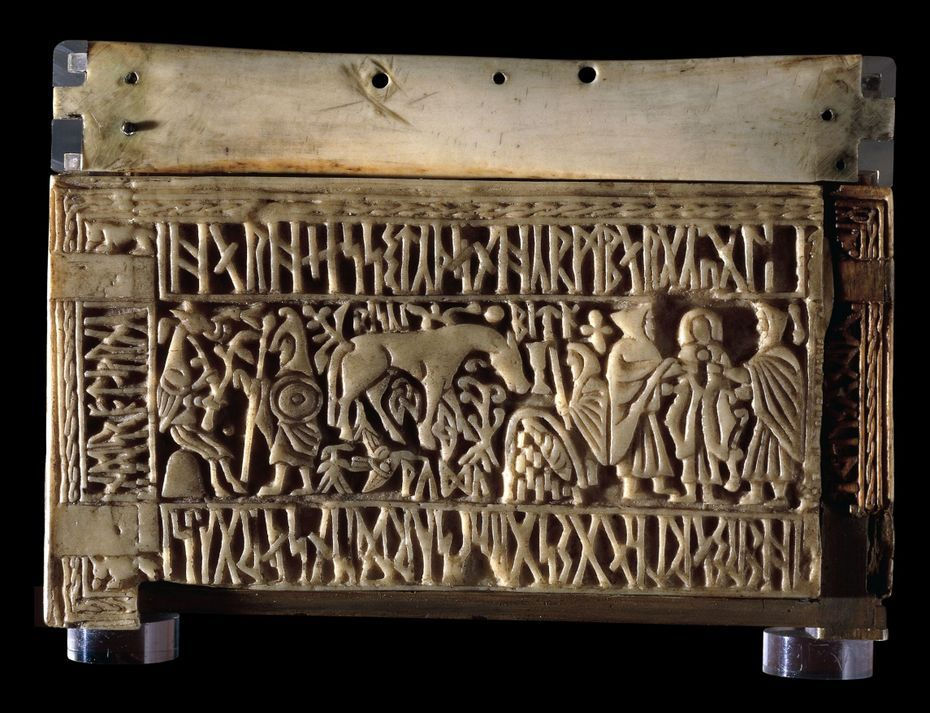 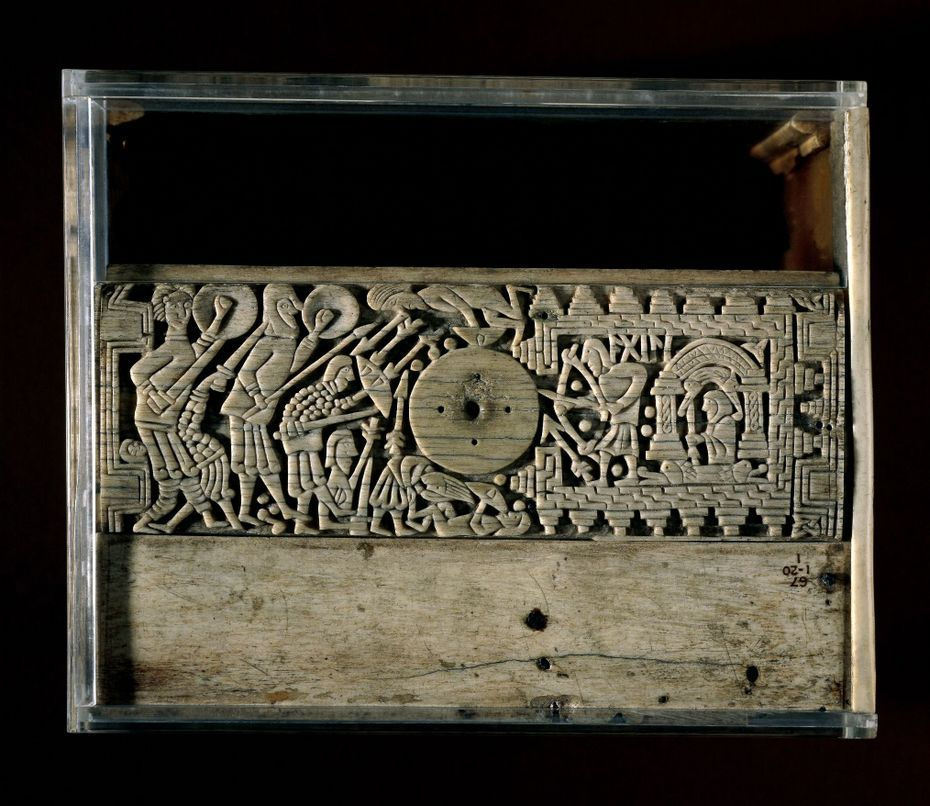 The Franks Casket – The Top Panel 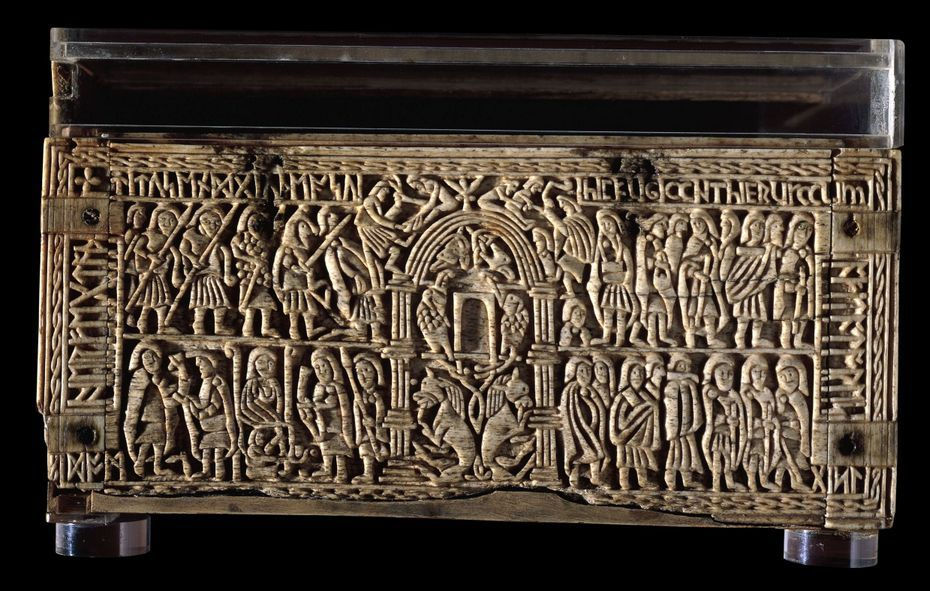 The Franks Casket – The Rear Panel 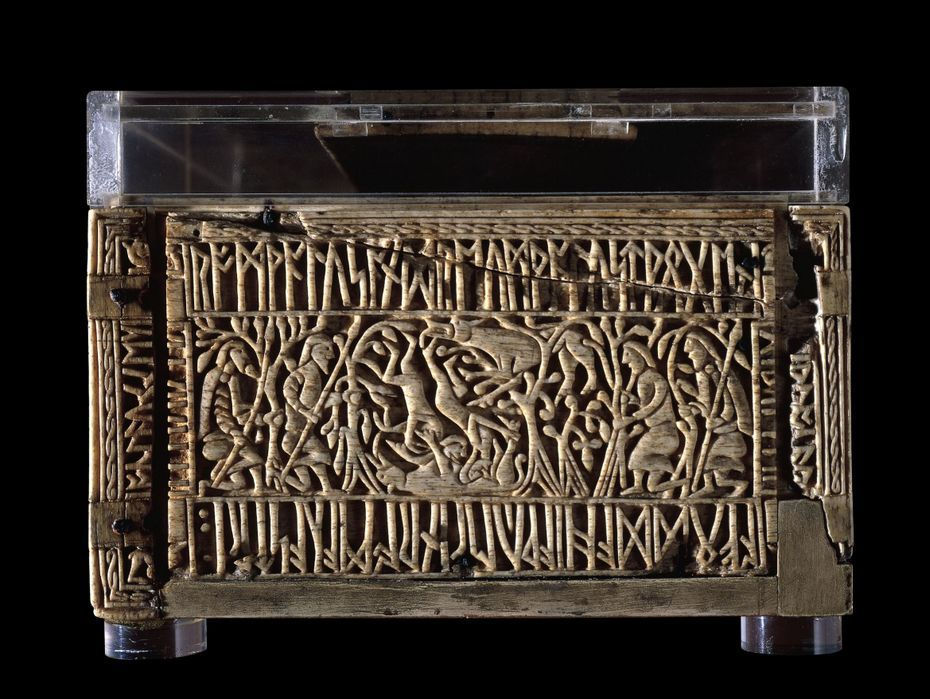 The Franks Casket – The Left Panel