In September 1066 the Viking King Harald Hardrada, one of the two challengers to the English throne, landing in Yorkshire. He was accompanied by the exiled Earl Tostig, brother of the English King Harold. The other claimant was William of Normandy who maintained the English throne had been promised him by Edward the Confessor. Aware of the Viking threat William was content to delay his own invasion until Harold was at his most vulnerable, dealing with Hardrada in the North.

After a bloody but successful engagement against the Earls Morcar and Edwin, at Gate Fulford on 20th September, the Vikings recieved the surrender of York, which capitulated without resistance, no doubt to prevent the sack of the city. Harold, in the meantime, was in the unenviable position of having to decide whether to march north to confront Hardrada, leaving the south of England unprotected against William, or remain where he was in anticipation of a Norman invasion, leaving Hardrada to consolidate his control in Yorkshire. Harold chose to march north, in the hopes of defeating Hardrada and being able to return south in time to confront William.

Agreements had been reached for hostages to be handed over to Hardrada at Stamford Bridge, some seven miles to the east of York. Hardrada, perhaps suspecting that Harold would not leave southern England under the threat of Norman invasion, felt confident enough to leave a third of his troops and armour at their base camp at Riccall, on the River Ouse, before approaching Stamford Bridge. Harold’s army, probably all mounted troops, reached York on the morning of the 25th. Reinforced by the remnants of Morcar’s and Edwin’s forces he immediately marched from the city to Stamford Bridge, taking the Viking invaders completely by surprise.

The battle of Stamford Bridge was a decisive victory for the English King. It proved him to be an able commander and the English troops, particularly the Housecarls, to be well trained, highly skilled and capable of great endurance. Yet in English history the victory at Stamford Bridge is inextricably linked to Harold’s defeat at the Battle of Hastings, which took place less than three weeks later. Had Harold not been forced to leave William’s landing on the south coast unopposed, and then face him with an army that had probably suffered significant losses, was ill-prepared and weary, then the outcome may have been very different.

The site of the initial action, for control of the bridge itself, is thought to be fairly securely located. The exact location of the main battlefield at Stamford Bridge is however difficult to determine, given the lack of landscape description in the sources. The area called ‘Battle Flats’ to the south-east of the town is generally accepted as the correct location.

The site of the bridge lies within the built up area and has done for many centuries, although the northern bank of the river there is only partly developed. Unfortunately, the village of Stamford Bridge has expanded considerably in the late 20th century, with new houses being built on the Registred Battlefield within the last few years. However the greater part of Battle Flats remains as agricultural land, so a significant part of the battlefield may survive. A disused railway cuts across the area running south-east to north-west and a minor road runs north-south.

Access is via this road, following the Minster Way long distance path. There is also another footpath which gives access to the east side of the battlefield. Access to the core of the battlefield is not possible. The area of the river crossing has been very much altered over the years but access is possible at several points along the river. 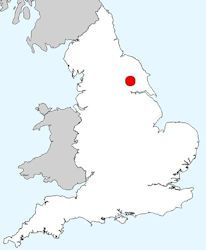