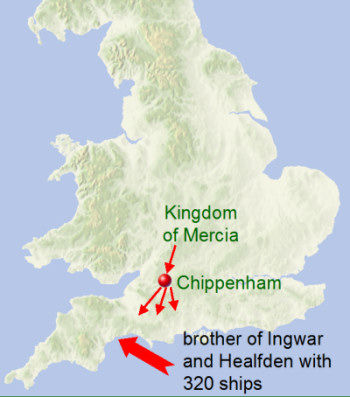 This year about mid-winter, after twelfth-night, the Danish army stole out to Chippenham, and rode over the land of the West-Saxons; where they settled, and drove many of the people over sea; and of the rest the greatest part they rode down, and subdued to their will; — all but Alfred the King. He, with a little band, uneasily sought the woods and fastnesses of the moors.

And in the winter of this same year the brother of Ingwar and Healfden landed in Wessex, in Devonshire, with three and twenty ships, and there was he slain, and eight hundred men with him, and forty of his army. There also was taken the war- flag, which they called the Raven.