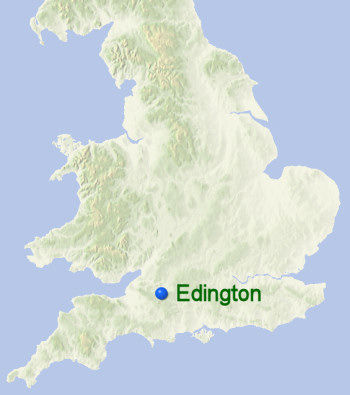 Then within one night he went from this retreat to Hey; and within one night after he proceeded to Edington; and there fought with all the army, and put them to flight, riding after them as far as the fortress, where he remained a fortnight.

Then the army gave him hostages with many oaths, that they would go out of his kingdom. They told him also, that their king would receive baptism. And they acted accordingly; for in the course of three weeks after, King Guthrum, attended by some thirty of the worthiest men that were in the army, came to him at Aller, which is near Athelney, and there the king became his sponsor in baptism; and his crisom-leasing was at Wedmor. He was there twelve nights with the king, who honoured him and his attendants with many presents.