Weymouth, Weymouth Relief Road, Ridgeway hill (SY 672 857). During earthwork operations at Ridgeway Hill, in connection with the Weymouth Relief Road scheme, archaeologists from Oxford Archaeology South uncovered a mass burial pit, roughly 7 m in diameter and 1.5 m in depth, containing multiple sets of human remains (Fig 1). This unique find was widely reported at the time. Within the pit, a pile of decapitated skulls, 51 in total, had been placed in one area; the rest of the bodies appeared to have been randomly thrown into the pit. Apart from the human bone the only other finds from the pit were some sherds of late Iron-Age or early Roman pottery; however, initial radiocarbon dating of one of the bones suggested a date between ad 890 and 1030 for these bodies.

Analysis by osteological specialists established that all the uncovered remains are male and the overwhelming majority are aged from their late teens to about 25 years, with just a small number of older individuals. As a general group they are tall, robust in stature with good teeth and appear to have had healthy lifestyles. The skulls are complete with their mandibles and each has a number of vertebrae, indicating decapitation. The lack of any other finds, such as accessories associated with clothing, indicate that the bodies were probably naked when thrown into the pit. Samples of soil were taken from around the bodies to test for indications of textiles, which would have rotted away. 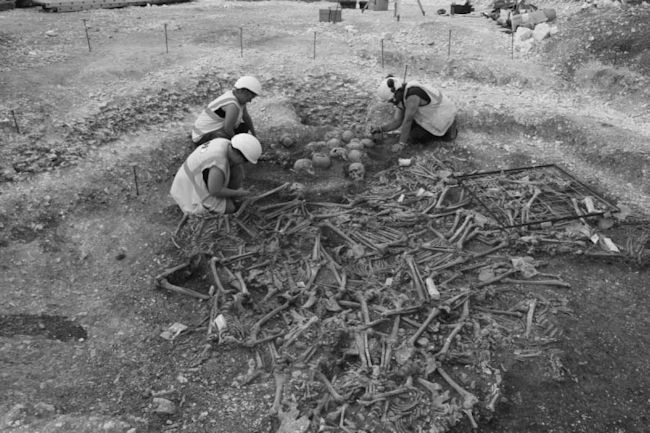 A catalogue of the disarticulated bones indicates that there are more bodies than skulls to go with them. There may have been as many as three or four additional skeletons in the pit, suggesting a small number of heads may have been taken elsewhere, perhaps as trophies, or set on spikes as a gruesome display of victory. Osteological study has shown that many of the executed men suffered multiple traumatic wounds to the skull and mandible as well as the upper spine, presumably related to the process of decapitation. These all seem to have been inflicted by a sharp-bladed weapon, probably a sword or axe. Less common were wounds elsewhere on the skeleton, which included cuts to a pelvis and blows to the chest and stomach (evidenced by crush injuries to the thoracic and lumbar vertebrae) and defensive injuries to the hands of some men; there is no evidence that the individuals were bound, and at least one hand had had its fingers sliced off in a typical ‘defensive’ wound.

To date, not much skeletal pathology unrelated to the act of execution has been identified. Exceptions include two examples of healed fractures to the femur or thigh bone. These fractures had healed after a fashion but are unlikely to have been medically treated (ie splinted) in any way and in one case this had led to a marked shortening of the right limb which was a good 5 cm shorter than the left; both of these individuals would have had pronounced limps. There was evidence of serious and longstanding infection in a small number of individuals. At least three and possibly four long bones showed evidence of a condition known as osteomyelitis. This is evidence of non-specific infection: in other words, it cannot be associated with a particular microorganism. The condition may result from the direct injection of bacteria from the skin surface during a penetrating bone injury. The appearance of these bones indicates that these individuals had lived with the infection for some considerable time, although they would have been in a lot of pain and mobility would have been affected. Detailed skeletal analysis should recover further evidence relating to the demographic make-up, lifestyles, activities, general health and diets of these men.

In order to try to answer the question who the men were, isotope analysis on ten of the individuals whose remains were deposited in the pit has been undertaken by Dr Jane Evans and Carolyn Chenery at the NERC Isotope Geoscience Laboratory, part of the British Geological Survey, based in Nottingham. Isotopes of various elements derived from drinking water and food are fixed in the enamel and dentine of teeth as the teeth are formed in early life. Following a meticulous process of preparation and chemical cleaning in the laboratory the isotopes can be released from the teeth and measured using mass spectrometry techniques. Strontium and oxygen isotopes give indications of local geology and climate respectively, while carbon and nitrogen isotopes reflect diet. Taken together the readings can be used to form an opinion on where the individuals originated. The results show that the men in the pit had grown up in areas where the climate is colder than in Britain. One individual gave readings compatible with an origin north of the Arctic Circle. They had certainly not lived their formative years on a chalk geology such as is present in Dorset where they were found. The carbon and nitrogen isotopes showed they had eaten a high-protein-based diet that is comparable with known sites in Sweden. The range of readings obtained also points to the fact that they did not have a common geographic origin. Taken together, the readings strongly indicate that the men executed on the Ridgeway originated from a variety of places within the Scandinavian countries. In sum, the evidence supports the impression that these bodies relate to the execution of a group of defeated Viking warriors.

As noted, a broad date range of ad 890-1030 had been obtained by radiocarbon dating of one of the recovered bones. In an effort to narrow this and test the potential for refining the dating a further two radiocarbon dates have been obtained. These suggest an execution date from between ad 910-1030, with a higher probability that it occurred in the latter half of this period.

The site of the mass burial pit, in a prominent location on the Ridgeway, next to a main road and close to a Hundred boundary and prehistoric monuments, is typical of places used for executions during this time.59 However, the large number of individuals and method used make it unlikely that the pit is the result of normal criminal justice being practised. The time period in question was one of considerable conflict between the resident Anglo-Saxon population and invading Danes. Viking raids such as the one recorded in the Anglo-Saxon Chronicle, where three ships ravaged Portland in ad 982, were common and there were a series of major battles in the south of England as successive Anglo-Saxon kings and Viking leaders fought for control. The mass grave could denote a victory statement by Anglo-Saxons after an unrecorded battle or skirmish. We cannot be sure, of course, if the conflict occurred close by or if these men were prisoners who were only later dispatched away from the battlefield. (David Score)