The History of the Bayeux Tapestry

The first documentary reference to the Bayeux Tapestry was in 1476 in the Inventory of the Treasury of Bayeux Cathedral which records:

“very narrow strip of linen, embroidered with figures and inscriptions

representing the Conquest of England”

The inventory goes on to describe the tradition of hanging the textile around the nave of the cathedral during the Feast of Relics.

During the French Revolution, the Tapestry was discovered being used as a cover for a wagon. It was rescued by a lawyer, who kept it safe until after the troubles when he presented it to the local authorities. (Bertrand, Simone (1965). “The History of the Tapestry”. In Frank Stenton. The Bayeux Tapestry. Phaedon Press.)

In 1803 the Tapestry was required for display at the Musée Napoléon in Paris. However, when Napoleon abandoned his planned invasion of Britain it was returned to Bayeux, as it had lost its value as propaganda.

In Bayeux it was displayed on a vast reel. It was described in a travelogue of 1829:

“It is right, first of all, that you should have an idea how this piece of Tapestry is preserved, or rolled up. You see it here, therefore, precisely as it appears after the person who shews it, takes off the cloth with which it is usually covered.”

In 1870, during the Franco-Prussian War and in 1939-1944 when there were threatened invasions of Normandy, The Tapestry was removed for safe keeping. 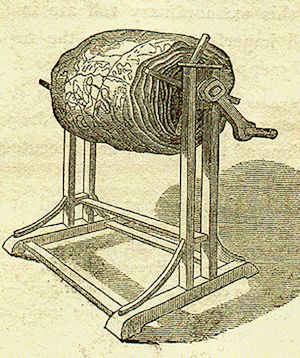 Next Page: The Purpose of the Bayeux Tapestry