On the 20th September 1066 Harold Hardrada’s Viking army, accompanied by Tostig’s rebels, marched north towards York. The fleet had been left under a strong guard at Riccall, 10 miles to the south of the city.

Edwin and Morcar, the Ealdormen of Mercia and Northumbria, had probably marshalled substantial forced from across the North. Their English army marched southward out of the York to challenge the invaders. A mile and a half south of the city walls they seem to have taken up a strong defensive position across the main road at a ford immediately to the south of the village of Gate Fulford.

The battle of Fulford is often treated as a minor battle of no great significance. This is far from the truth, for it must have resulted in substantial losses for the northern English army. Had Edwin and Morcar known that Harold was marching north with a large army then they could probably have waited behind the defences of York until he arrived. As a result, the final victory over the Vikings might have been far more cheaply won by a stronger army. As it was the combined losses at Fulford and Stamford Bridge must have severely weakened Harold’s army and contributed significantly to its destruction at Hastings. 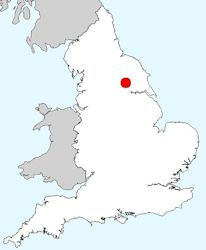