In AD1002, the Saxon king Æþelræd II recorded in a charter that he ordered “a most just extermination” of all the Danes in England. He had been warned by his witan (council) that there was a Danish plot to assassinate him.

The order was carried out on St Brice’s Day, Friday, the 13th of November 1002. Historians have differed on the extent that this was actually a massacre, but there does seem to have been significant loss of life. Among those that may have been killed was Gunhilde, who may have been the sister of Sweyn Forkbeard which would certainly explain Sweyn’s actions in 1003 and 1004.

the charter of 1002 records that “on that day, the Danes in Oxford fled to St Fridewides church expecting to find refuge, but instead were pursued by the townspeople, who then set the church on fire.”

That this took place is verified by a charter of 1004 which states: “For it is fully agreed that to all dwelling in this country it will be well known that, since a decree was sent out by me with the counsel of my leading men and magnates, to the effect that all the Danes who had sprung up in this island, sprouting like cockle amongst the wheat, were to be destroyed by a most just extermination, and thus this decree was to be put into effect even as far as death, those Danes who dwelt in the afore-mentioned town, striving to escape death, entered this sanctuary of Christ, having broken by force the doors and bolts, and resolved to make refuge and defence for themselves therein against the people of the town and the suburbs; but when all the people in pursuit strove, forced by necessity, to drive them out, and could not, they set fire to the planks and burnt, as it seems, this church with its ornaments and its books. Afterwards, with God’s aid, it was renewed by me.”

In 2008, excavation at St Johns College, Oxford revealed a mass grave containing at least 35 skeletons – all young males . Radiocarbon dating of the bones indicated that the bodies were dumped between AD960 and AD1020. Examination of the skeletons showed evidence of severe weapon wounds and of burning. The nature of the wounds suggest that the victims were fleeing when attacked. The evidence is consistent with the description of the St Brice’s day Massacre in Oxford.

In 1003 and 1004 Sweyn I (Sweyn Forkbeard), King of Denmark, led punitive expeditions in 1003 and 1004 in retaliation for the St. Brice’s Day massacre. Sweyn did not return to England until 1013 when he led a successful campaign and was accepted as king throughout the country, forcing Ethelred II into exile; although Sweyn died less than a year later.

Stenton 1 and other historians have viewed the St Brice’s day Massacre as a political action that led to Sweyn’s invasions of 1003 and 1004. 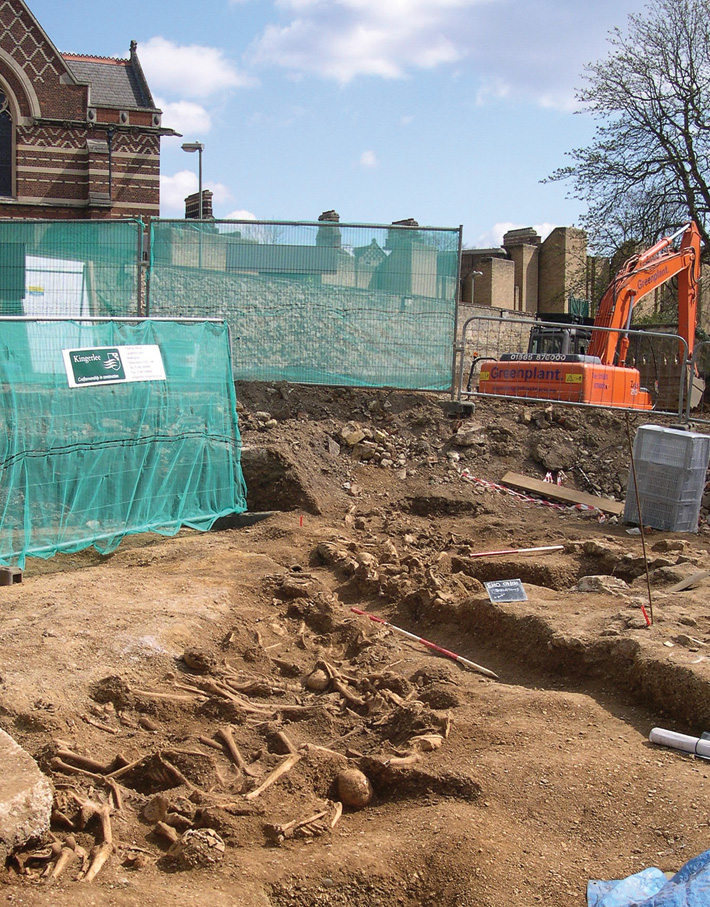 Excavation of a mass grave found on the grounds of St. John’s College at the University of Oxford in 2008
(Image: Thames Valley Archaeological Services)