London and the Vikings: the Documentary Evidence 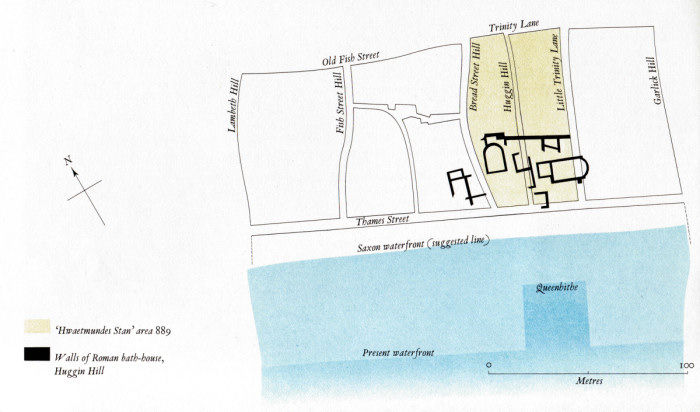 Hwætmundes Stan area 889
click on the image to enlarge

Alfred, king of the English and the Saxons, and Æthelred, subregulus et patricius Merciorum to Wærferth, bishop of Worcester; grant of land in London æt Hwætmundes stane

Alfred, king, and others to Plegmund, archbishop, and to Christ Church, and to Wærferth, bishop, and the church of Worcester; grant of 2 yokes of land at Ætheredes hyd (Queenhithe) on the Thames. One to each

In his article, Dyson pointed out that a meeting was held at Chelsea in 898 or 899 between King Alfred, Ealdorman Æthelred , Bishop Plegmund and Bishop Wærferth. The purpose of the meeting was to “discuss the restoration of London”, and that this was the time when the streets were laid out around Queenhithe.

He also points out that these land grants are not to be seen ‘as random gifts’ ‘in favour of random ecclesiastics’, but that these men were Alfred principal assistants in the spiritual regeneration of Anglo-Saxon England, and that there presence at Chelsea indicates ‘that their duties extended to the equally urgent business of governance and administration.’

Dyson suggests that the establishment of the Burghal System, providing both military protection and a market economy, was one of the main matters in which these advisors were concerned, and that similar arrangements were being made for London, which is not included in the Burghal Hidage.

Dyson also compares the situation with London to the evidence for a charter relating to Worcester. In this charter, the ealdorman Aethelred and his wife Aethelflaed, Alfred’s daughter, having responded to a request from bishop Waerferth to fortify the town of Worcester, now granted to the bishop half the rights which belonged to themselves ‘in market place and in street’. It is noticeable that the same people who were involved in this grant as in the Queenhithe charter.

Next Page: London and the Vikings: the Archaeological Evidence